Whether you want to become Joaquin Phoenix’s 1981 Joker, a Fortnite skin or a VSCO girl, there’s a 2019 Halloween costume for you.

Even if you choose to dress as none of these things (or don’t know what they are), the holiday is less than two weeks away.

According to a National Retail Federation survey, Americans will spent $3.2 billion on Halloween costumes this year.

We consulted local and national retailers, who clued us in on a range of trending costumes for 2019.

If you’re looking for ideas from pop culture and beyond, here are several categories that might contain something of interest, or at least point you in the direction of your glorious costume motif.

Just itching to get into an Arthur Fleck costume to depict Joaquin Phoenix’s take on the Joker in the controversial film from Todd Phillips?

While Joker is a perennial costume favorite — along with everything Batman and Harley Quinn, who gets an extra boost this year from the upcoming movie “Birds of Prey,” you can mix and match to get your perfect Joaquin Joker.

Even if you’re unfamiliar with what VSCO girls are (or TikTok, the social media that fueled their rise, along with Instagram), the look is simple to recreate, Poch says. (VSCO, pronounced “visco,” is a photo-editing app.)

Just get yourself a Hydro Flask (or other water bottle alternative), a hair scrunchie, reusable straws and an oversized shirt. Make sure to wear shorts that you can’t see underneath. Pronouncing “sksksks” — the sure sign a VSCO girl is present — is optional. And keep that VSCO app handy to edit those pics!

But there are other ways to reference 2019 in your costume. Remember when everyone was all about that FaceApp old-age filter? The concept is just waiting for a Halloween makeup treatment.

Another social media-born option is the Fiji Water Girl, who went viral at the the start of the years when she was on the Golden Globes red carpet, photobombing all the celebrities. 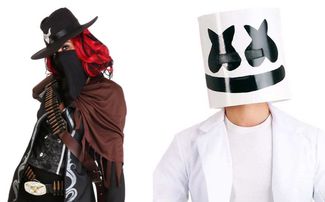 Fortnite-inspired costumes are going strong for 2019. Here are DIY looks for the DJ Marshmello, at right, and Calamity.

The online game burst onto the scene in 2017 and inspired some of the trendiest costumes of 2018. Now, retailers are back with even more Fortnite looks for adults and children based on “skins” depicting various characters like Skull Trooper, Rabbit Raider, Rex, Zoey and Crackshot.

“TomatoHead is a really big one for us this year,” says Erin Springer, spokeswoman for Spirit Halloween, based in Egg Harbor Township.

Expect to see a lot of Marshmello heads walking around, too, thanks to a concert the DJ hosted in the game (here’s a DIY look … and one for Calamity).

Apart from witches, black cats, vampires and ghosts, Superheroes are perhaps the most reliable Halloween standby, especially after the rise of DC and Marvel movies.

This year, HalloweenCostumes.com is seeing Spider-Man at the top of the heap, propelled by the movies “Spider-Man: Far from Home” and “Spider-Man: Into the Spider-Verse.” Spider-Gwen and Spider-Woman also get a boost. 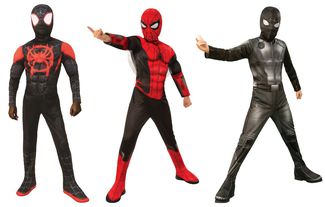 Spider-Man gets a boost from “Spider-Man: Far from Home” and “Into the Spider-Verse.”

With “Star Wars: The Rise of Skywalker” coming out this December, related costumes, including Rey and Kylo Ren, continue to be draws, Poch says. But also look for Shuri from “Black Panther,” Harley Quinn and Wonder Woman (“Wonder Woman 1984” is due out in 2020).

Spirit Halloween is seeing more interest in the anime superhero category through costumes from “Dragon Ball Z,” “Bleach,” “Naruto” and “My Hero Academia.” 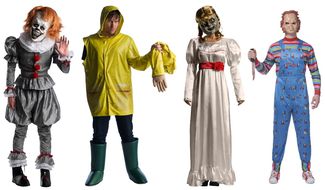 Pennywise, “It,” Annabelle and Chucky costumes for Halloween 2019.

For those looking for a nod to the scary and campy part of the dress-up tradition, Chucky costumes for children and adults, inspired by the recent “Child’s Play” remake, join other horror classics like Michael Myers in the horror category at Spirit Halloween. (And remember, Chucky was inhabited by the spirit of a strangler from Hackensack!)

Stephen King’s evil clown, Pennywise, is also available in all sizes and styles — for men, women, children and pets — thanks to the September sequel “It: Chapter Two.”

If you somehow escaped “Baby Shark” in 2018 and 2019, you’ll have to tell us how you did it (we’re assuming you didn’t have a computer). The viral children’s song, which currently commands upwards of 3 billion views on YouTube, is ripe for a family costume ensemble.

Halloween brings children’s and babies’ plush shark costumes and shark-headed outfits and hoodies for the adults. 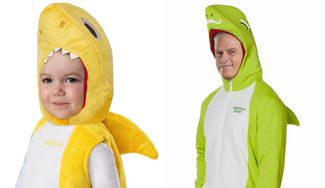 Aliens, Area 51 and the moon

Remember that whole “let’s go storm Area 51” movement? If you want to memorialize the occasion, you can always go as a big-eyed (or any other type of) extraterrestrial this Halloween.

In other out-of-this-world developments, it was also the 50th anniversary of the moon landing this past July. Poch suggests on-theme alien-astronaut pairings. You know, for couples costumes.

Sure bets for Millennials can be found in ’80s and ’90s throwback looks, like group “Saved by the Bell” costumes and “Buffy the Vampire Slayer” outfits.

Aiding and abetting Halloween nostalgia is the rampant “reboot fever” gripping the TV and film industries. Just consider the upcoming “Little Mermaid” live show and Disney remake, “The Lion King” live-action remake released in July and the “Aladdin” live-action adaptation that came out in May — all trendy costume themes. 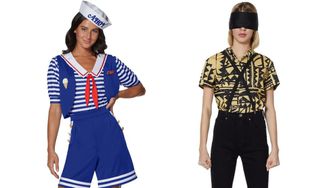 New for 2019 are Stranger Things costumes inspired by the show’s Scoops Ahoy ice cream shop and one of Eleven’s latest outfits.

Other enduring pop culture properties reference more recent times. The buzz around the upcoming Disney movie “Frozen 2” has “Frozen” costumes, top-selling looks for Halloweens past, back into the fold. Spirit Halloween costumes from TV’s “The Office” play off Dwight and Jim.

“Stranger Things,” which is heading into a fourth season, remains an appealing theme for group looks, too, with the addition of Scoops Ahoy and Eleven costumes from the mall ice cream shop in the third season.

“Game of Thrones” fans who want to playfully nudge the eighth and final season of the show can insert a coffee cup into their Daenerys Targaryen look, to recall the blunder that memorably made it into one episode. At Edison-based online retailer Costume SuperCenter, the best-selling costumes for children this year are Harry Potter Gryffindor robes. The top get for adults: a “Jurassic World” inflatable T. Rex costume.

“Inflatable costumes, people just love them,” Poch says, pointing to a Wacky Waving Inflatable Tube Man costume, along with other fanciful inflatable looks, piñatas and unicorns among them.

“They’re silly, they’re funny, they’re not obscene,” she says. “They make them in kids’ sizes now.”

Get the latest updates right in your inbox. Subscribe to NJ.com’s newsletters.