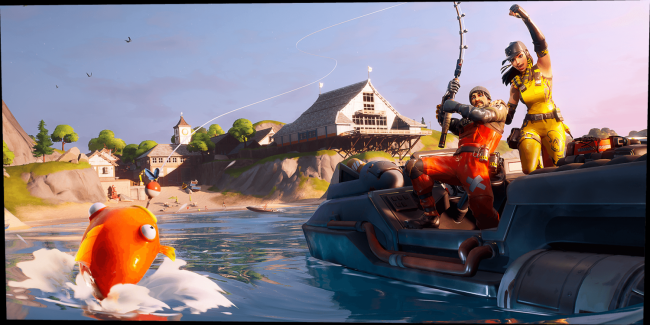 Longtime fans of Fortnite continue to enjoy marked improvements of the game, even if those improvements meant removing some content.

Fortnite’s Chapter 2 update—marked by the 11.0 release version—distills every good thing about the game into a concentrated brew. Rolling back to just the basics, Epic shaves all the unnecessary features to make this version of Fortnite the leanest it has ever been.

Thus, Fortnite Chapter 2 is the perfect time to jump in. This is true both for players who have never tried any battle royale game and for returning players coming back to the island.

Years of improvement led to tons of content and features for the Epic game. However, too much innovation could sometimes hurt—making the game feel bloated at times. Fortnite Chapter 2 fixes this by returning back to basics.

As an example, they shaved the weapons list to leave only the essentials: pistols, shotguns, SMGs, assault rifles, sniper rifles, RPGs, and throwables.

This not only lowers the skill floor but also removes a lot of encumbrance from the game. With fewer weapons to master, players can focus more on other important aspects of the game: building and resource gathering.

The update also introduced changes that make playing the game feel better than ever before. Aside from improved graphics and visuals, the game now sports a new map for players to explore. There’s not a big difference from the previous map, but it’s different enough to offer a varied experience for older players.

Swimming has also been added to the game. It feels like Fortnite has found the perfect formula for swimming. Going into the water in Fortnite doesn’t feel like a chore, especially since it allows you to swim like a dolphin—literally.

Another cool addition to the game is the ability to carry fallen allies (and enemies). This allows teams to hide their fallen comrades to safety before attempting to heal them, which makes for some thrilling tactical gameplay. Alternatively, you could carry fallen enemies and dump them where no one could find them.

Probably the most important quality of life change for the game isn’t as easily noticeable, but it really encourages newer players to keep on playing the game. Matchmaking has been improved—letting new players play against each other. Bots have also been sprinkled all over servers, letting newbies experience lots of kills and victory royales early in their careers.

Of course, sooner or later, players will match against other players, which means they will still have to improve their skills to make any form of progress in-game. Thankfully, the game has a lot of progress trackers that will encourage players to play more of it.

New challenges, goals, and milestones were also added to Chapter 2, which gives players additional things to do aside from aiming for the top. These challenges help level up a player’s profile, unlocking more content for them to enjoy.

Fortnite Chapter 2 retains most of the charm that previous seasons of Fortnite had—making sure that veteran players won’t feel out of place. Still, Epic managed to strip the game down enough to make it palatable for new players.

Epic managed to achieve this often precarious balance between keeping old fans happy and getting new people to try out the game—and also making them stay for longer.

Thankfully, this success could be sustained with a variety of limited-time events, just like the recent Fortnitemare Halloween event. Weekly challenges that roll out every Thursday, like the current Dockyard Deal Challenge, also helps keep the game fresh.